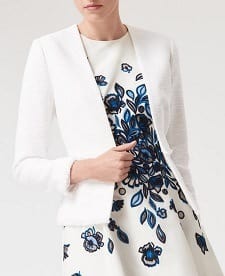 Our daily workwear reports suggest one piece of work-appropriate attire in a range of prices. This gawgeous white tweed jacket from L.K. Bennett is low in stock in some sizes, so if you like it, do check it out now. I like the texture to it and the frayed accents at the waist and at the hem (much easier to see here). It’s $495 at L.K. Bennett, only in lucky sizes. Marsha Tweed Jacket Psst: I spotted this in the wild at the LKB store in Columbus Circle (as well as the Eline dress we featured a few weeks ago, and this gorgeous fit and flare dress) and they’re all lovely in person — very soft but substantial, if that makes sense. Two lower-priced options are here and here; here is a plus-size option. This post contains affiliate links and Corporette® may earn commissions for purchases made through links in this post. For more details see here. Thank you so much for your support! Seen a great piece you’d like to recommend? Please e-mail [email protected]