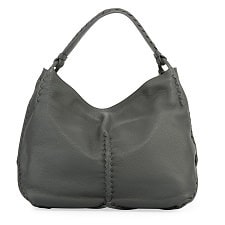 Bottega Veneta is on my bucket list — I’ve been admiring these bags for so long that maybe I’ll have to pull the trigger next time, for a birthday or something like that. I love that they’re known for not having big logos on their bags or huge plates or anything like that — they’re just well-made, stylish, beautiful bags. This one is $2,050 at Neiman Marcus (in five colors), and you can always look at The RealReal and similar sites to see if there are any pre-owned options for sale. Medium Deerskin Leather Hobo Bag

A few options that are more affordable are here, here, and here.