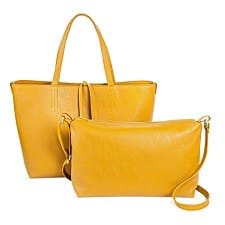 I love the really bright, happy yellow of this tote from Target. I haven’t seen a yellow bag like this in a while — I like the tassel detail and the fact that the center is removable and becomes a little purse on its own. This bag is getting good reviews so far and is only $45. It comes in gray, pink, and the lovely mustard yellow. Merona Tote with Pouch

Right now you can save $15 when you spend $75 at Target on select clothing, shoes, and accessories.

« 7 Ways to Freshen Up Your Work Wardrobe for Spring
Tuesday’s Workwear Report: Slub Suiting Jacket »
Back to Top