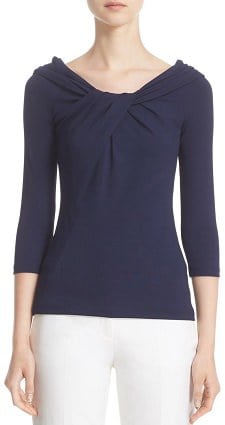 Oooh: I always love a graceful, feminine top like this — the wide neckline can be such a flattering look with anything from skirts to pants to suits.  With this kind of look I think it’s important to keep the clavicle mostly clear, so I’d avoid a necklace and instead choose a great pair of earrings, a brooch, or just focus my accessories elsewhere (watch, bracelets, whatever).  This particular top is $595, available for pre-order at Nordstrom.  Twist Neck Stretch Jersey Top

This $49 top is very similar but without the wide, low neckline; this top or this top are more expensive but slightly more similar.  This $55 sweater is kind of similar in plus sizes.