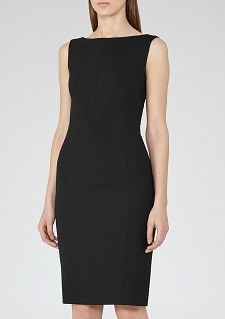 Our daily workwear reports suggest one piece of work-appropriate attire in a range of prices. Today we’re featuring this amazing sheath dress — I love the darts, the sort of art deco vibe to the seaming, and the amazing textured fabric. We featured the entire suit last week, but this dress is so amazing that I wanted to draw your attention to it by itself. I’m not sure exactly what to call the pattern on the front — it’s not quite a sunburst — but I think it’s really flattering and lovely. The dress is still available in most sizes 0-10 for $340 at Reiss. Reiss Dartmouth Textured Tailored Dress Here’s a lower-priced option and a plus-size alternative. Seen a great piece you’d like to recommend? Please e-mail [email protected] (L-all)

« Weekend Open Thread
How Do You Pamper Yourself When You’re Sick? »

« Weekend Open Thread
How Do You Pamper Yourself When You’re Sick? »
Back to Top