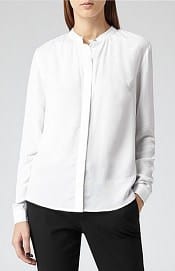 I feel like we’ve had a ton of white blouses on here lately, but there are so many good ones out right now! I like this textured, fluid blouse from Reiss — available in navy as well — it looks simple but chic, and I love that it’s machine washable. It’s in the Reiss Outlet — it was $180, but is now marked to $90. Reiss ‘Yara’ Textured Clean-Cut Shirt

A couple of plus-size alternatives are here and here.

« Suit of the Week: Loft
Networking Lunches: What to Wear (If You Don’t Wear a Suit) »

« Suit of the Week: Loft
Networking Lunches: What to Wear (If You Don’t Wear a Suit) »
Back to Top