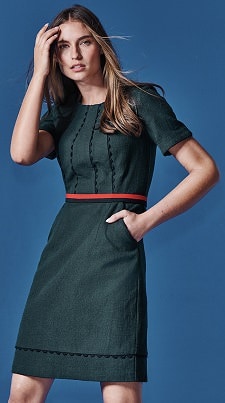 This $170 dress at Boden caught my eye because it has both sleeves and pockets. (We’re always on the hunt for pockets, and we once rounded up sleeved dresses with pockets.) I also like that it’s lined and has a concealed back zip. It’s available in the pictured seaweed as well as navy with white edging. The dress comes in regular, petite, and long sizes and is getting great reviews so far. Scallop Jane Textured Dress

A more affordable option is at Talbots, as is a plus-size option. (Both are available in three size ranges.) Today you can get 25% off your entire purchase, so you may want to check out our post on how to buy a work wardrobe at Talbots.

« Coffee Break: Elisa Birthstone Pendant Necklace
What to Say in a Goodbye Email »

« Coffee Break: Elisa Birthstone Pendant Necklace
What to Say in a Goodbye Email »
Back to Top