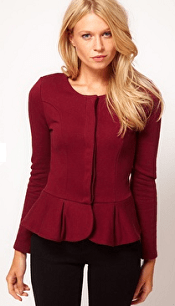 Today, I’m liking this stretch jersey peplum jacket. It’s very feminine, for sure, but I think the fact that it’s a jacket and has so many structural seams that it sort of makes up for it.  I like it best in the burgandy — I’d probably wear it with a black pencil skirt and, perhaps, light blue accessories, such as a chalky chalcedony ring or brooch.  It was $60.36, but is now marked to $48.29 at ASOS (regulars and petites). ASOS Peplum Frill Jacket

« Suit of the Week: Theory
How to Secretly Use LinkedIn to Change Careers »

« Suit of the Week: Theory
How to Secretly Use LinkedIn to Change Careers »
Back to Top