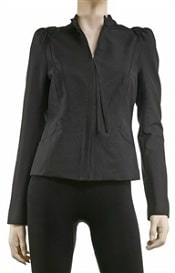 I always like a moto jacket — the zip, the fitted look, the inevitable black — it can all be very hip. This one is a cotton/silk blend, though — different from the usual leather ones I’ve seen — and I think it would be great on both a workday and a weekend. At work I’d wear it (probably 1/3 or 1/2 zipped) with a pair of loose trousers, or perhaps an A-lined skirt or dress, or perhaps even a pencil skirt (although that, for some reason, feels very Palin-esque). Either way, lovely jacket, and not a bad sale: was $240, now $98 at MaxStudio.com FRAILLE MOTO JACKET
Seen a great piece you’d like to recommend? Please e-mail [email protected] with “TPS” in the subject line.

« Suit of the Week: Alice + Olivia
How to Tell Someone They Smell Bad »

« Suit of the Week: Alice + Olivia
How to Tell Someone They Smell Bad »
Back to Top