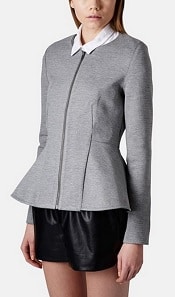 Topshop isn’t a brand I usually think of for workwear, but I’m loving not one but two blazers from them, both at Nordstrom: this lovely peplum jacket (available in four colors, pictured in grey) and this other open-front blazer. Both are really reasonably priced ($96 and $90, respectively) and they look hip and easy to style. Topshop Tailored Peplum Jacket

« Suit of the Week: ASOS
Guest Post: Tips for Traveling Solo »
Back to Top