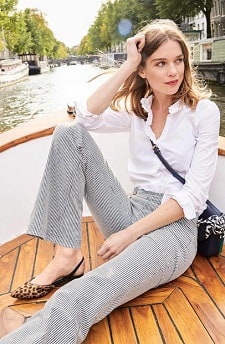 If you’re a fan of traditional dress shirts, do consider this one from Boden — it has a little ruffle, and it’s feminine but still professional. It’s a nice twist on the classic style, and it’s 100% cotton and machine washable. The shirt is available in white as well as a chambray and chambray with polka dots and comes in sizes 2-18. It’s $85 at Boden. Virginie Ruffle Shirt

Here’s a plus-size option (also in petite, regular, and plus petite).

« Suit of the Week: Dolce & Gabbana
How to Function at Work Without Sleep »

« Suit of the Week: Dolce & Gabbana
How to Function at Work Without Sleep »
Back to Top