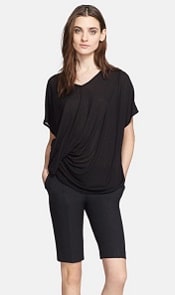 Nordstrom just started its spring sale, and there are tons of cute things — the lingerie in particular was jumping out to me today. For a more “suitable for work” picture (even if it is a recommendation for what to wear on the weekend!) I really liked this draped tee from Elizabeth and James. Being a New Yorker I of course like it as styled — all black, and I can kind of even get behind the Bermuda shorts — but I also think it would look great with all manner of pants. The shirt was $135, but is now marked to $95. Elizabeth and James Denver Draped Tee