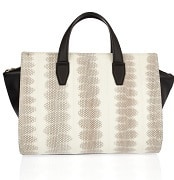 The Outnet has some killer sales right now on workwear accessories and outfits. Take, for example, this gorgeous snake and leather satchel — at 13″ x 10″ x 7 ” it’s roomy enough for a notepad and more, and it’s hard to think of an outfit that wouldn’t look good with the beige/black/white color scheme. Originally $1,675, the bag is now marked to $795.12. Alexander Wang Pelican snake and leather satchel