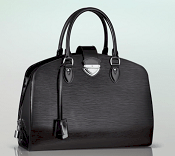 Sure, we all know what basics professional women are supposed to have in their closets, but if you’re buying one for the first time or replacing one you’ve worn into the ground, it can be a pain to find exactly the right incarnation in stores. In “The Hunt,” we search the stores for a basic item that every woman should have.

I’m a huge fan of colorful, bright bags — but that said, if I didn’t have a few simple black bags in my closet I’d be majorly on the hunt right now. They can be a bit boring, for sure, but they’re classics for a reason — they’re major workhorses. We haven’t rounded up some simple black bags since last April, so I thought I’d do a round up today… Readers, which are your favorite simple black everyday bags? Have you bought any great ones recently?