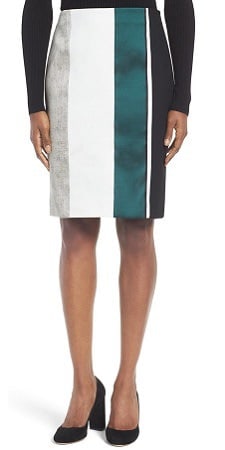 This gawrgeous jacquard skirt is black on the back and striped in the front — and the stripes are really lovely. It can work with a variety of colors, as well; you could do black or winter white, pull out the green or go with an opposite like a purple, or even go preppy and pair it with royal or French blue. I think it just looks like a really lovely skirt. Note that it has a hidden side zip (and that the color is listed as “Vanilla Light Fantasy,” which sounds more like a dessert at an upscale Italian restaurant, or perhaps something NSFW). The skirt is $335 full price at Nordstrom and comes in sizes 0-14. BOSS Vastrina Stripe Front Pencil Skirt