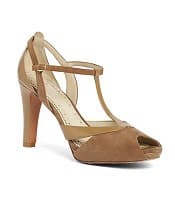 I’ve been ogling these sophisticated light brown T-strap peep-toes from Brooks Brothers for a few weeks. I like the mixed leathers (suede and patent), the 3″ heel with .25″ platform, and the sale: the heel was $228, but is now $91. (Brooks Brothers is a reader favorite for comfortable heels, so their shoe sale might be worth checking out in general — lots of work-appropriate pieces and good prices.) The pictured T-straps also come in black. Brooks Brothers Suede Peep Toe T-Strap