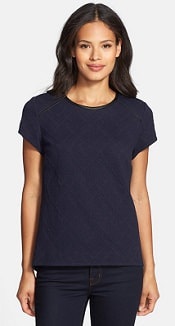 Nordstrom has a ton of nice Classiques Entier on sale right now, and I’m liking this structured, thick tee with leather trim details. It seems like a great way to elevate ankle pants or the like for the office — I can particularly see it being great if you tend to run hot (or you have an aggressive radiator in your office). The top was $198, but is now $98.98. (And please check out this gorgeous dress and matching jacket, also — they’re not in the price points for our Thursday posts but I love that dress!) The pictured top: Classiques Entier Stamped Structure Leather Trim Top

Here’s a more affordable option, which also comes in plus sizes.

« Suit of the Week: Nina Ricci
Admin Question: Redesign »
Back to Top