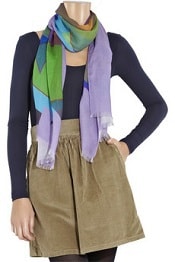 I must say — I am unfamiliar with Jonathan Saunders in general, but I am loving what I’m seeing of him at The Outnet — the colors! the patterns! the rich fabrics! Loving this multi-colored cashmere and silk scarf in particular — and I love that it has a non-printed side, as well. Gorgeous! Was $490, now $245 at TheOutnet.com. Jonathan Saunders Cashmere and silk-blend printed scarf (L-2)