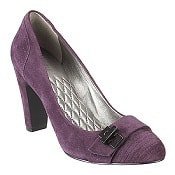 Reader A sent in these shoes — and they look to be great purple pumps. I like the buckle detail on the front, as well as the stripey detailing on the toe and heel. They’re available in black and purple for $39.97 (buy 1, get 1 50% off!) at Easy Spirit (available in sizes 6-12, M and W). Easy Spirit Shoes Lizzie Comfortable Dress Shoes (Purple)