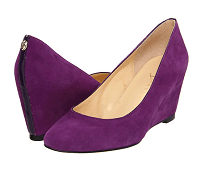 Ooh: I love a good purple pump. I like this wedge from Ivanka Trump — the darker patent leather strip down the back is a great detail. The purple shoes are $140 at Zappos, but do note: 6pm has them in red for $41 and black for $84, and Endless has them in gray and brown for $67.50.  Ivanka Trump – Linear (Purple Suede) – Footwear

« How to Do Well in a Telephone Interview
Wednesday’s TPS Report: Tipped wool blazer »

« How to Do Well in a Telephone Interview
Wednesday’s TPS Report: Tipped wool blazer »
Back to Top