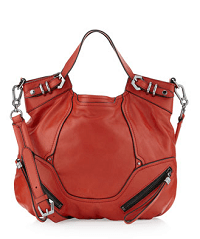 I keep seeing Oryany bags listed among some of my usual favorites (Botkier, Treesje, Kooba, etc) and so I’m officially intrigued. I like the look of this tote — and I love the lime green printed lining. At 13″Hx15″Wx3.5″D it should be plenty big enough for most things, even the occasional legal pad. It was $450, but is now marked to $325 at Last Call by Neiman Marcus. Tegan Tote, Red