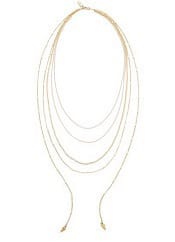 So. OK. I am really enjoying the new show Younger… but I am now starting to have a necklace complex. Why is the 43-year-old uptight editor always wearing huge statement necklaces (some of which I quite like)? Is it a comical, older-lady-only thing? Do we, like, need it to hide our cleavage wrinkles or something? (And, sigh, I just got a new Alexis Bittar necklace on Gilt, too.) If delicate necklaces are more your speed, then I like the look of this one from Vanessa Mooney… the dangly spike pendants look lovely. The necklace is $146 at Shopbop. Vanessa Mooney The Love Letter Necklace

(If you’re still into statement necklaces, though, then here are two nice ones at Last Call.)

« Networking Lunches: What to Wear (If You Don’t Wear a Suit)
Frugal Friday’s TPS Report: Angelina Skirt »
Back to Top