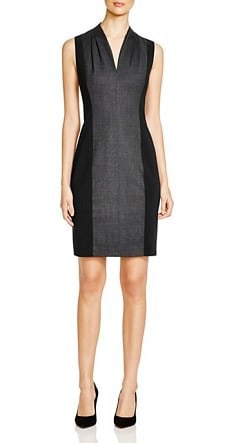 Our daily workwear reports suggest one piece of work-appropriate attire in a range of prices. Happy Monday! I love this sleek two-tone dress from Elie Tahari. The ruched details add interest without fuss, and I like the nice, high V. The back zipper is hidden (huzzah!) and I like that it’s available in sizes 2-16. It’s $328 at Bloomingdale’s. Elie Tahari Amabel Two-Tone Dress Update: Like this? See more Elie Tahari work outfits here. Psst: Nordstrom has a very similar dress with sleeves. Here’s a lower-priced option and a plus-size alternative. Seen a great piece you’d like to recommend? Please e-mail [email protected] (L-all)