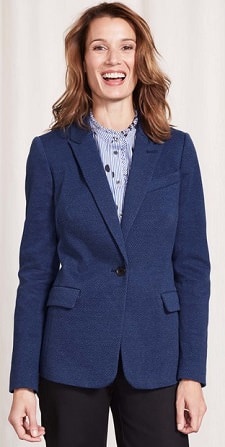 Our daily workwear reports suggest one piece of work-appropriate attire in a range of prices. I think this jacquard blazer from Boden’s new ponte line looks great. I like the unusual “imperial blue” color — a dusty but deep blue that I think you could wear with either navy or black easily. (It’s also available in “pink pearl.”) I just love the seams and the darts, the subtly textured jacquard fabric, and the fact that it’s fully lined. It’s $150 at Boden in sizes 2-16. Emilia Ponte Jacqard Blazer Here’s a lower-priced option in both regular and plus sizes, and here’s another plus-size option. Seen a great piece you’d like to recommend? Please e-mail [email protected] Psst: Happy Valentine’s Day to all! (L-all)

« Coffee Break: Bioelements Travel Kits
The Best Siri Hacks to Boost Your Productivity »
Back to Top