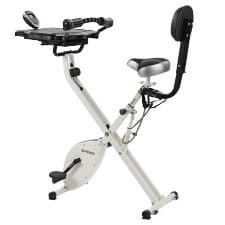 For reasons I don’t entirely remember, I wound up getting a bunch of health/diet books out of the library. (VB6 is amazing, for what it’s worth.) One of the more embarrassing ones (I guess?) that I borrowed was Maria Menounos’s Everygirl Diet book, in which I was intrigued to see her mention a Fit Desk (there’s even a picture of her riding it!). I’d been looking for something similar, and for some reason a zillion Google searches did not lead me to Fit Desk — so I thought I’d pass it along here, particularly since it’s much cheaper than a treadmill desk. I haven’t made the purchase yet — does anyone have this or some other tool you’ve used to get exercise into your day more reliably? Fit Desk