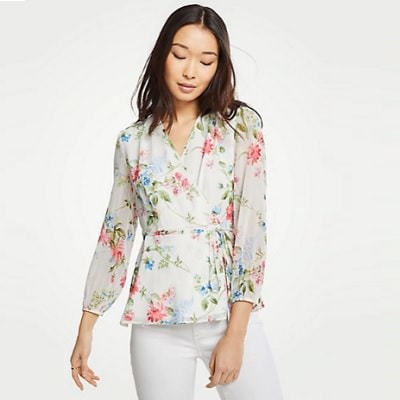 This top is just so pretty and spring-y. It has an ethereal vibe that I think could still fly in a business setting if styled with very structured pieces. I would wear it with a pair of fitted ankle pants and a slim-fitting blazer or replace the self-tie with a brown or cognac belt and wear it with a navy pencil skirt. I would also be sure to wear it with a white or nude-for-you cami underneath. The hidden snap closure is a nice feature to help prevent the wardrobe malfunctions that can occur with a wrap top. It’s $69.99 on sale at Ann Taylor and is available in sizes 00–18 in regular, petite, and tall. Through 5/25, you can get 40% off your purchase with code SUMMERTIME, which brings the price down to only $41.99. Floral Wrap Blouse

For plus sizes, Nordstrom has a floral wrap top from 1.State that’s on sale for $53.40 in the Nordstrom Half-Yearly Sale. (Here are our picks!)

« Nordstrom Half-Yearly Sale 2019 Picks for Work
The Hunt: The Best Comfortable Flats for Summer »
Back to Top