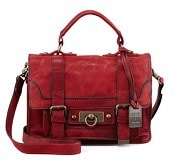 This is a bit more rugged than I usually like for the office, but I’m kind of liking the antiqued vibe.  I trust Frye to choose great leather (and have other smart details, like a solid turn-lock closure).  I like the striped lining and the smart interior pockets, and at 8″Hx11″Wx2″D I think it’s sized just right.  It’s $438 at CUSP. Frye Cameron Small Satchel Bag

« How to Manage Your Time
Frugal Friday’s TPS Report: Italian Flannel Ruched Dress »
Back to Top