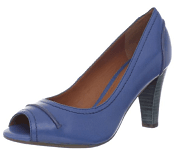 I was going to recommend this other lovely Geox pump when this deeply discounted, unusual cornflower blue peep toe caught my eye. $45 for a $150 shoe? Sign me up. There are very limited sizes in the blue (it’s full price but more available in the coral and camel colors), but looks like a great shoe. (Geox is on our list of comfortable heels; the brand is known for a more “breathable sole” — perfect if you wear them barefoot.) Geox Women’s Marieclairehigh3 Pump

P.S. I know I’ve had reports of some, er, distasteful ads on the site (e.g., “meet Thai girls,” video games geared at teenage boys, etc) — I THINK I’ve fixed the problem (as of this morning), so if you see anything else that’s problematic please send it my way. Thank you all for your patience!

P.P.S.  Peep toes are not appropriate for every office — know yours!