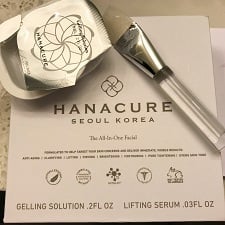 Recently, while watching Santa Clarita Diet, I turned to my husband and said, WHOA: Drew Barrymore’s skin looks amazing. Sure, she’s playing a zombie who feels amazingly alive now that she’s undead — plus, she IS Drew Barrymore — but still, I was impressed. (Side note/squee: hooray for Timothy Olyphant.) Obviously, this lead me to Google, which lead to reports that Barrymore swears by the Hanacure mask I’ve seen all over Facebook — aka “the Grandma” mask. FINE, said I: let’s order it. I just got the single mask ($29), but there’s a set of four for $110 also (that’s the one pictured). Here’s my quick Hanacure mask review and thoughts:

Dec. 2018 Update: Yay the mask is available at a TON more spots, including Barney’s, Neiman Marcus and Amazon.

Did it work? Well: I did catch a view of my face in a mirror in sunlight and found myself thinking, HEY, I do have some of Drew Barrymore’s luminous glow. Not QUITE as much as she does, but then again, she owns a skincare and beauty company AND probably has a trainer and regular facials at fancy spas and blah blah blah and I, well, not. The big caveats here, of course, is that a) I’m kind of into skin stuff right now (I’m still doing my regular skincare regimen, using Good Genes on a regular basis, and I just bought a sampler set of Drunk Elephant stuff that I’m loving) so who knows whether this particular mask had any effect on my skin or whether it was, you know, cumulative, b) I must admit I didn’t really study my face in sunlight BEFORE the mask, and of course, c) I’ve been pretty lucky thus far with “good skin” (and hooray for extra pounds being great for keeping wrinkles at bay!) so, yeah, there’s that.

TL;dr Hanacure mask review: I’d buy it again — particularly for a night in with girlfriends.

Ladies, have you tried the Hanacure mask? What’s your review? Are you generally a fan of facials at fancy spas, or do you prefer to do your skincare at home? Have you tried anything lately that you’re loving? 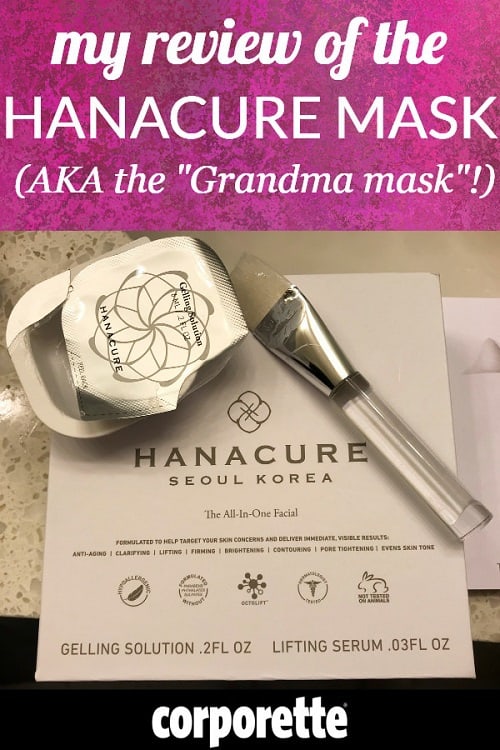