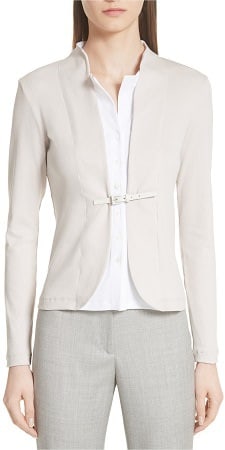 Happy Monday! What an interesting layered look — the white top is part of the cardigan. It has functional buttons, and the white buckle that “gently defines the waist” is a functioning buckle. I do wish for the price it were something other than cotton and Lycra, but that does mean it’s machine washable. I think it’s a very easy but stylish piece, and it’s $298.90 (temporarily down from $495, as it is part of the Nordstrom Anniversary Sale).  Inset Rib Jersey Cardigan