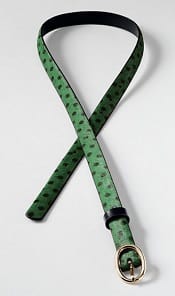 How many belts is too many belts? I rarely wear belts, to be honest, but when I saw this lovely calf hair polka-dotted belt marked to $12 I had to snap it up. Green is trending right now, but this belt is also available in red and blue for $12, and a cheetah print for $29. Lands’ End Skinny Print Calf Hair Belt