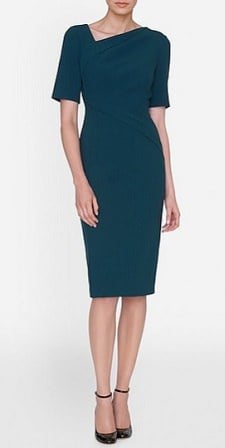 This structured dress from L.K. Bennett would be a perfect new wardrobe essential. It comes in two beautiful but work appropriate colors, evergreen and pink, but what I love most about this dress are the details: the assymmetrical neckline, notched sleeves in the back, hidden zipper, and it’s fully lined. The elastane in the fabric also provides a touch of stretch. Available in sizes 2 through 14 (size 10 is sold out in the evergreen color). Saskia Dress

« Deal Alert: Ann Taylor’s Sale is On MAJOR Sale (60% Off!)
The Busy Woman’s Guide to Last-Minute Cleaning »
Back to Top