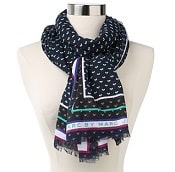 As spring weather s-l-o-w-l-y arrives, now is a great time to swap your cashmere and wool scarves for cotton ones. I’m liking the fun little print on this black scarf from Marc by Marc Jacobs — I think it would work well with a variety of coats (or blazers worn as coats), and 6pm has it on a pretty decent price. It was $118, but is now $77. Marc by Marc Jacobs Vivie Print Scarf
(L-2)