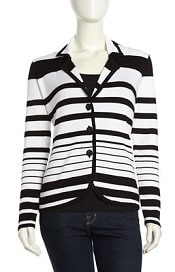 I’ve been ogling this black and white mixed stripe blazer for a few weeks now, and it’s at the best price I’ve seen it at: was $125, then $85, today marked to $55.25. I think it’s a fun, summery piece that will be easy to throw on over all sorts of dresses and simple tees. Sizes S-XL are still available. Three-Button Striped Knit Blazer Seen a great piece you’d like to recommend? Please e-mail [email protected] (L-2)

« Suit of the Week: Tahari ASL
What to Wear When You’re Out of Town & Working Late »

« Suit of the Week: Tahari ASL
What to Wear When You’re Out of Town & Working Late »
Back to Top