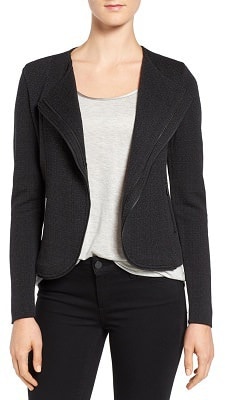 Our daily workwear reports suggest one piece of work-appropriate attire in a range of prices. This cotton/rayon/modal moto jacket comes in both regular sizes and plus sizes. I go back and forth with moto jackets, but this one seems graceful and elegant and edgy all at the same time. Note that it has front pockets and doesn’t require dry cleaning, just hand washing (which, if you’re careful, can mean the hand-wash cycle on your machine, of course). Right now, both versions are 40% off: The regular/petite is $130, down from $218, and the plus is $142, down from $238. NIC+ZOE Zip Trim Jacket Seen a great piece you’d like to recommend? Please e-mail [email protected] (L-all)

« Coffee Break: Bayville Loafer
Previously, on Corporette… »
Back to Top