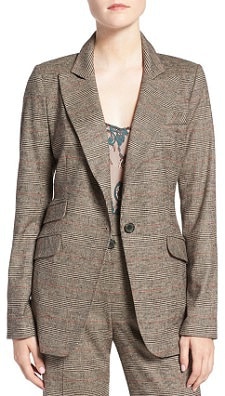 Both Olivia Palermo and Chelsea28 create a lot of interesting fashion — very stylized pieces for stylish women. This blazer, with beige and orange accents and a menswear vibe — seems very cool. There are matching pants, but I’m not really a fan of the high-waisted, loose pants (plus, as Tim Gunn would say, it’s a lot of Look).  I’d wear it with a simple black sheath dress or — depending on how style-forward you and your office are — possibly with a leather accent like a leather skirt or vest. (I think I am remembering this suit from Akris.) The blazer is $199, available in sizes XXS-XL, over at Nordstrom.  Olivia Palermo + Chelsea28 Glen Plaid Blazer

Frustratingly I can’t find a good glen plaid blazer in plus sizes, but this tweed jacket has a slightly similar vibe, and this highly rated blazer comes in a similar-ish khaki/brown.

« Coffee Break: Mini Faceted Stud Earrings
How to Tell Your Boss You’re Not Her Servant / Personal Assistant / Chauffeur »
Back to Top