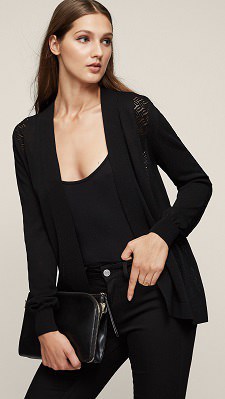 This attractive little cardigan comes in black and white at Reiss and is a blend of viscose and nylon. (It’s hand washable.) It looks like a cool-girl sweater that you can layer in a lot of different ways — I prefer the black but the white also looks very nice. It’s got a slight blousing to the sleeves and it’s long and open. I think it’s very chic, particularly as styled — look through the pictures on Reiss’ site to see more. The cardigan comes in sizes 0-10 and is $230. Open-Front Cardigan

Here’s a more affordable option (in black or white) and a plus-size option (three colors).