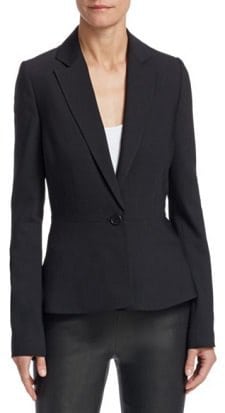 Happy Wednesday! Today’s pick is a great peplum suit jacket at Saks. It’s certainly affordable at $137, down from $275, and considering the discount, it has a pretty good range of sizes still in stock. To me, this looks like just the kind of blazer to keep in your office. It’s probably not going to be confused with too many suits that you have, but it also has a little personality and feminine feel to it while remaining very conservative. Check out our recent post on how to wear blazers with dresses — and we’ve also talked about how to buy a blazer to keep in the office. This certainly looks like a good one if you’re on the hunt. Peplum Suit Jacket

A plus-size option is available at White House Black Market.

The Nordstrom Half-Yearly Sale has begun! From now through June 3, you can save up to 40%. We’ll have a roundup later this morning, so stay tuned!