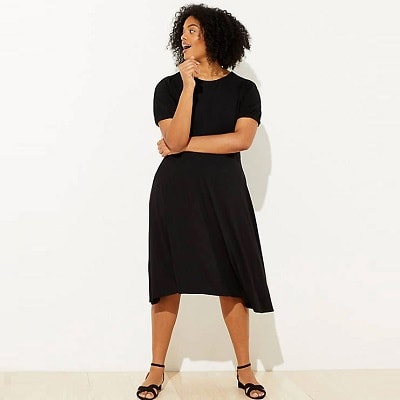 This dress just looks like New York City in the summer to me. I’m told that in other parts of the country, black is not a “summer” color, but in my decade of NYC living, black was always seasonless. (A friend of mine used to refer to his closet as consisting of black and “black pastels” (i.e., grays).). I like the slightly puffed sleeves and flared skirt on this knit dress. I would wear it with a pair of low-top Chuck Taylors for a casual weekend look. You could also wear this with a bright cardigan in a casual office. Puff-Sleeve Flounce Dress