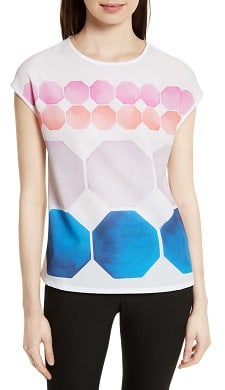 We’ve featured Ted Baker t-shirts before, and they’re a great option for fancy t-shirts for beneath suits. This particular mosaic pattern shows up in a lot of different pieces, like a dress, workout gear, scarves, etc., so if you happen to like the design but not on a t-shirt, do check those out. And if you like the idea of fancy, silky statement tee but you’re not a fan of this particular pattern, Ted Baker has a million of them with other designs, and they’re all around $79-$95 with a size range of 00-14. This one is $95 at Nordstrom. Rozey Mixed Media Tee

This plus-size tee from Marks & Spencer has a pattern reminiscent of some Ted Baker florals. There’s also a nice option from Lafayette 148 New York … but it is $548.

« Suit of the Week: Talbots
Four Types of Comfortable Flats Every Professional Should Own — Even If You Hate Ballet Flats »

« Suit of the Week: Talbots
Four Types of Comfortable Flats Every Professional Should Own — Even If You Hate Ballet Flats »
Back to Top