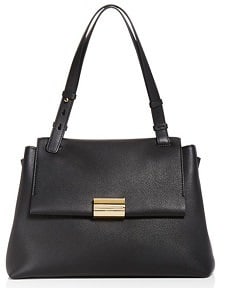 We’re on a bit of a ladylike, feminine, classic, elegant kick right now, and this bag is no exception. This gorgeous satchel from Ferragamo just looks so elegant while also having a very modern and fresh look. I could see someone like Grace Kelly or Audrey Hepburn carrying this bag with aplomb. It’s available at Zappos/Amazon for $2,250, while Bloomingdale’s has it for $1,990. The “ecorce/golden brown” color is at 6pm for $1,195. Salvatore Ferragamo Ginger Satchel