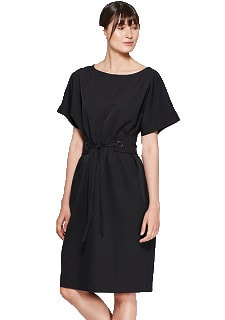 Prologue, a new brand at Target that was launched last month, looks very promising, particularly if you like affordable pieces that are fairly minimalist. I like the wide sleeves and wide neckline on this dress, and I think the belted tie-waist detail is really nice. It’s a pullover style, and while it doesn’t have pockets, it is machine washable, so it’s got that going for it. I think it looks great for the office, especially for taller women who have a problem finding dresses that are long enough. It comes in sizes XS–XXL and is $29.99. Short Sleeve Belted Tie Waist Dress

Macy’s has a plus-size option that comes in sizes 16W–24W.