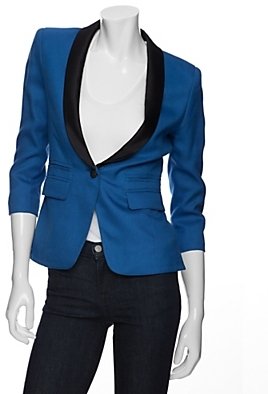 Love it. Love Smythe, love cobalt, love a great blazer. For the office I’d wear it with a purple blouse or tee and gray trousers. It’s $595, and available for preorder at Intermix. Smythe Colorblock Blazer Seen a great piece you’d like to recommend? Please e-mail [email protected] (L-2)

« Weekend Open Thread
The Hunt: Black Cashmere Sweaters on Sale »
Back to Top