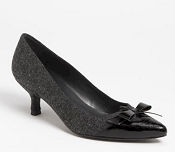 Nordstrom has begun its shoe clearance sale, and there are a lot of good markdowns — lots of Stuart Weitzman, Cole Haan, Salvatore Ferragamo, Anyi Lu, Via Spiga, and more. For today’s coffee break, I’m liking these “Daydream” pumps — apparently a Nordstrom exclusive. I like the gray flannel mixed with the shinier (patent?) leather toe, and the 2.5″ heel looks nice and walkable. The pumps were $375, but are now marked to $187.49. Stuart Weitzman Daydream’ Pump (Nordstrom Exclusive)