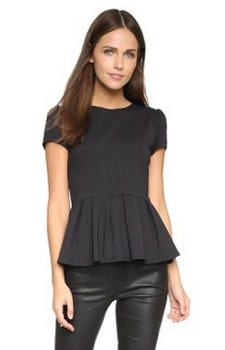 I thought I’d be getting sick of the peplum trend, but I kind of like the direction it’s heading in. This top almost looks like it’s the peplum trend intersecting with the cropped-shirt trend, but in a very feminine and flattering way that is totally work-appropriate as well as cute for the weekend with jeans or, you know, leather pants. This one is only available in limited sizes (boo), but this Ava top has a wider range in stock. The pictured top is $108 at Shopbop. Susana Monaco Kiki Short Sleeve Peplum Top

« Coffee Break: Gerlinda Pump
Previously, on Corporette… »
Back to Top