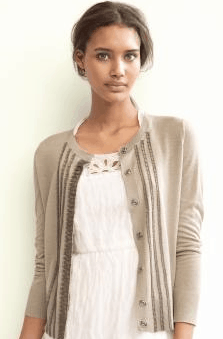 We like this silk-blend streamers cardigan, which is part of the 25% off online-only sale on regular-priced merchandise that Banana Republic

is having today. We particularly like the way the beige cardigan looks with beige pants — it’s a very polished, together look, but it has a casual, non-suit vibe.  It’s $79.50 at full price ($59.62 with code BRSUNNYDAY). Silk blend streamers cardigan

Seen a great piece you’d like to recommend? Please e-mail [email protected] with “TPS” in the subject line.
(L-1)

« Workwear Hall of Fame: Longchamp Totes
Toning Shoes at the Office – Yay or Nay? »
Back to Top