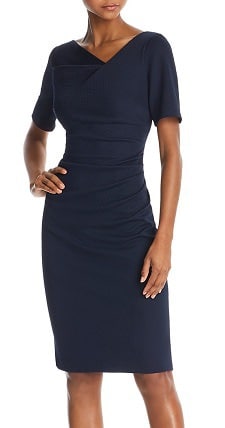 I’ve always liked pique knits as a lightweight summer fabric. I’ve mostly seen summer pants and blazers out of pique (and mostly cotton pique, although this is a poly blend) — so this dress is a first for me. Still, I like the sleeves, the flattering ruching, the interesting neckline, and the price: $69-$119 (mostly $119) at Amazon, Bloomingdale’s, Bluefly, and Zappos, available in sizes   Pique Knit Jacquard Draped Sheath Dress

Looking for a similar option in plus sizes? This cowl neck sheath from the same brand is great and available at Bloomingdale’s and Nordstrom.

« Workwear Hall of Fame: J.Crew Factory Suits
Do You Make Your Bed Every Day? »

« Workwear Hall of Fame: J.Crew Factory Suits
Do You Make Your Bed Every Day? »