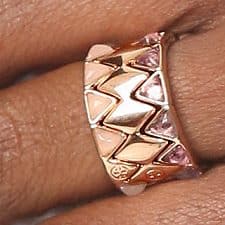 I don’t think this is quite as tricky as the puzzle rings I loved in my teens, but I do love the rose gold and semiprecious stones — and I like that it’s stackable. It was $195, but is now marked to $135 at ShopBop.  Tory Burch Puzzle Metal Ring Set

This Kendra Scott ring set is similar and slightly more affordable at $75; this dainty hammered ring (which is stackable but not sold as a set) is so pretty, but more expensive at $159.

« How to Find the Best Planner For You
Wednesday’s Workwear Report: Asymmetric Crepe Sheath Dress »

« How to Find the Best Planner For You
Wednesday’s Workwear Report: Asymmetric Crepe Sheath Dress »
Back to Top