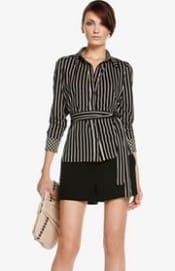 Reader A recommends this lovely silk blouse by Diane von Furstenberg, noting that “this top is great for work/with jeans. It’s a non-wrap DvF top in silk jersey. Tends to gape a bit on my curvy self even though I sized up – which I do in DvF – but very sleek all the same. Can slip on over head due to stretchy jersey so sewing the placket may be an option for curvy ladies. Tag says ‘dry clean’ but I always handwash DvF stuff.”  It looks like a great classic, and is a nice change from all of the horizontal stripes I’m seeing for spring (and far more flattering).  It’s $245 at dvf.com.   Fatima Top in Ropes