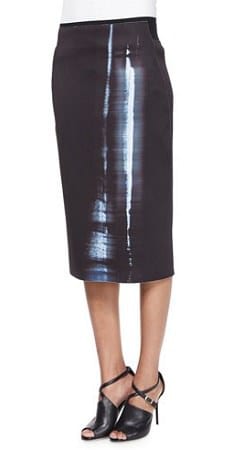 Neiman Marcus has some killer sales going on right now, but lots of lucky sizes, so start by filtering by your size. Serious discounts are to be had, though, including this cute pencil skirt from Elie Tahari. Interestingly, the skirt is not only a pull-on style, but is also reversible, which makes me flash back to the classic SJP movie, Girls Just Want to Have Fun — but maybe that’s just me. Regardless, it’s a cute skirt for work — add a black turtleneck and a brooch high on your shoulder/clavicle area and you’ve got an easy outfit. The skirt was $298, but it’s now marked to $104. Elie Tahari Cammie Reversible Printed Pencil Skirt Here are two simple plus-size pencil skirts, both 65% off in the same sale. Seen a great piece you’d like to recommend? Please e-mail [email protected] (L-all)